With the rapid growth of digital technologies and advertising in particular, many people predicted the decline of the traditional OOH ads as outdated and ineffective.

Nevertheless, we witness the opposite – out of home advertising is becoming incredibly creative, and even brands that work in the digital sphere don’t neglect this channel, and place their billboards in the public venues.

Check out this billboard promoting Slack, a corporate messenger – while it may seem a waste of resources to advertise an IT tool in the “real world”, the company does it for a good reason, or a number of them. 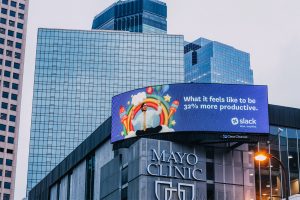 So, what’s the catch? Why does out of home advertising still work in the digital era? Let’s discover the psychological basis of this phenomenon.

Consumers that seldom watch TV or have an ad-blocker installed on their devices are very numerous today. Out of home advertising has become one of a few ways to reach them when other media channels fail. When people are out in the street or commuting, they are exposed to multiple formats of ads which aren’t possible to “block” yet.

But, taken the variety of formats and creativity of today’s commercials, some of them actually make people want to get in front of them, like the following IBM billboards, providing sitting area, shelter from the rain or helping passers-by up the stairs. 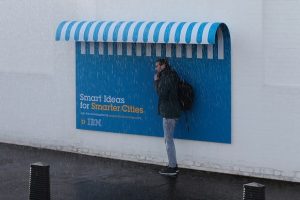 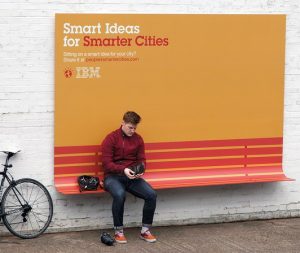 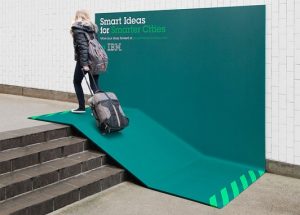 According to Out of Home Advertising research by Arbitron, 84% of people pay attention to billboards they pass – that’s a lot. But there’s hope for the remaining 16%. It turns out, even though we seem not to be noticing ads in our surroundings, having a sort of “immunity”, our brain still does, registering them without letting us know about it.

Basically, this means that having your ads placed out there guarantees they will be seen or at least registered unconsciously.

But … watch out! Some ads may be tracking you when you’re not looking – like this billboard for Snowden movie in Toronto – it would spy on the passers-by and stream the video.

Psychological research has found that people react better to familiar things than to unfamiliar, this is called a familiarity principle. It can be witnessed, for example, when you feel that you “know” a person you occasionally spot in the bus, and feel closer to them than to a total stranger.

The same effect can be reached by exposing audience to your brand outdoor ads. Even if consumers have never purchased from you before, seeing your commercials will make your company familiar which can be a deciding factor when people are faced with choice. They are more likely to pick you over your competitor who didn’t advertise.

Look, how McDonald’s openly shows that it’s not intimidated by the close competitor – Burger King, and one of its billboards actually shows the detailed directions to get to it – just 258 km away:) 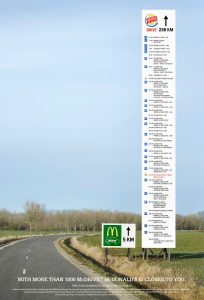 Contrary to our own belief that our buying decisions are the result of careful evaluation and weighing the pros and cons, research by Harvard Business School professor Gerald Zaltman shows that 95% of our purchase decisions are made unconsciously, and only then they are justified through logic. The most “pressing” psychological needs are safety, belonging, biological conditions (thirst, hunger), prestige etc.  So, this is it – appealing to intuition and basic feelings is the ultimate way to reach the consumers’ subconscious sphere and stimulate buying.

This is one of the key reasons out-of-home advertising is still effective. It uses compelling imagery, tempting copy and is, seemingly, omnipresent, plus, more and more often, tells a story rather than tries to sell. So, logic hardly has a chance.

This is how Ikea appeals to the hearts of its visitors by building a replica of the Syrian home in the war zone next to its showrooms. 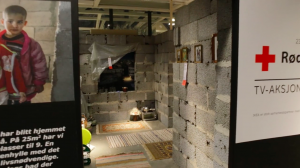 Yes, OOH is alive and kicking, and new technologies are giving it power and huge potential (check out our recent post on using facial detection in advertising).

Use TRACKLAM to roll out your ad campaign hassle-free, fast and easily, without leaving your computer and track all the stats of both digital and out-of-home advertisements. Sign up and try now!